Luna Deluxified - available on the game fair in Essen!

There's not only the Deluxified version available, we also have some of the expansions, which include 2 small expansions and a set of metal moon coins, replacing the victory point-tokens.

English and German rules are included. 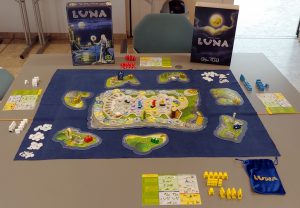