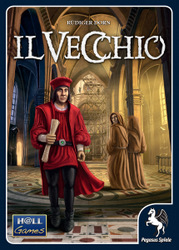 "Florence during the 15th century. The wealthy, yet unimportant Medici family rises to one of the most powerful dynasties of her day. Cosimo de Medici, also known as Il Vecchio ( the Elder), does not only dominate over politics and economy, but he also influences the city with regard to culture and arts. By distinguishing himself as commissioner and patron, e.g. by initiating the build of the Cathedrals dome, he improved the citys and, of course, his own familys reputation.
The other great families can no longer tolerate that. Co-regent Giuliano I. de Medici falls victim to a conspiracy  who will now obtain dominance over Florence?"

The players slip into the role of the heads of these rival noble families striving to infiltrate the Medici empire and to become the new leader of the city.
The game board depicts the Tuscany Region. Its capital city Florence is surrounded by other towns connected with one another by a road network. Each town offers a specific action indicated by the symbol below the towns name. Three corners of the game board feature roads to outside regions.
The players goal is to take over provinces in the outside regions, or send their family members to the city council of Florence, or enhance their noble rank. By doing so, they will gain Power points and/or useful special abilities and actions. In order to achieve this goal, they need to recruit followers, collect money and crucial scrolls. These can be gained when traveling through the towns of Tuscany.

Yet, this is not that simple: Towns with crest symbols require middlemen in order to take the towns action. Those middlemen, however, fear the anger of Il Vecchio, thus, moving to another town after each action and, consequently, rarely being there where you might need them. Carriages and bishops help to reduce the dependency on middlemen.

The greater the influence of the players in the outside regions and in Florence, the more Il Vecchios power will be fading  indicated by Medici crests. Once the stack of Medici crests is empty and, thus, the Medici have completely lost their power, the players will determine which family has gained the most influence in Florence and the outside regions.

Il Vecchio is a tactical game in which adept and foresighted usage of the figures is key. The available actions are simple, but provide various possibilities and yet keeping the game at pace.